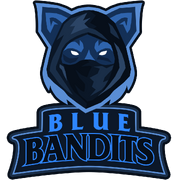 A shadowy mercenary organization for hire, the Blue Bandits are both revered and feared across the breadth of Elderfall ~ favoring coercion and subversion to brute force ~ the gold they hoard is used for their own nefarious gains, to secure their power and influence among the elite of the realm.

Founded by a trio of kings during the middle of the Elderfall War, they acted as a top-notch spy organization to run errands for the king and do undercover missions for the army. However not very long after they were founded one of the three kings fell ill and died in the middle of the night at the top of his tower due to a knife wound. Uncovering the secrets of the murder, the Blue Bandits went rogue and withdrew from strongholds around the realm.

Instead of working with the kings, they began to steal gold and supplies from treasuries and banks. Using this they were able to leverage some of the most powerful people in the realm to their side. At least until the Red Raiders put their foot down and said "stop".

Of course, the Blue Bandits disappeared only to rise back in present day, out of the shadows. Using newfound teachers they trained their warrior's to become different, to change and to become masters of their art. Then they resumed what they started many years ago, and the balance of Elderfall began to tip.

So, the Red Raiders began to hunt down and freeze assets, including the killing off Blue Bandits. When this reached the ears of the leader of the Blue Bandits, they struck back. Little did they know that this would spark ongoing skirmishes that would continue to this day. Nobody knows who the winner of the ongoing clash is, but when a victor arises, one team will fall...