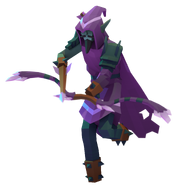 Darkness was the path for the corrupted Shadow Hunters, having sacrificed their humanity to achieve new powers ~ slinking in the shadows, they are trained in the art of both perception and deception ~ with Mastery granting them the Shadow Dodge illusion, vanishing in a cloud of dark suffocating smoke.

The assassin was furious. Doors slammed, knives flew, the walls and the floors rattled as he screamed in an incoherent rage.

If those pesky Warriors hadn’t snuck up on him, he would’ve had the king’s head! He would be celebrated as one of the greatest assassins of all time! He would have his name in the scrolls! His techniques, his tools, his feats admired by Hunters for generations to come!

As he stood, raging, a thought slipped its way into his mind. He turned his head and gazed at his bow, an artistic masterpiece he stole from a Falcon Hunter. He slowly smiled, a terrifying expression on his cold, gaunt face. He would teach them, those idiots with swords and axes, a lesson they won’t soon forget.

He started by finding a way to deal with enemies who got too close to him. Grazing the markets, he bought some explosive powder off a merchant. After a few days of tinkering, he created a special kind of explosive that blinds those who get too close. A flashbang, he called it. He fashioned a mask, one designed to allow to see when others won’t. All this to give him gold, riches upon riches, beyond what anyone could imagine.

However, it had its flaws. What about the archers, far from the blinding explosion? While he was running away from the would-be ambushers, they could take advantage and shoot him down. Stumped, he took to magic. He talked with the local sorcerer and after being convinced with a few hundred bags of gold, the sorcerer created clothes out of cursed charms that rendered him invisible on demand. Perfect.

To complete the transformation, he remade his bow. He cut off the wings, made it smaller. Lighter. Faster. Deadlier.

What should he call this, this terrifying combination of gear, clothes and bow? He has advanced to be far more than a mere “hunter”. Ghost? Wraith? Shade? Might as well stick to your roots. Shadow Hunter.