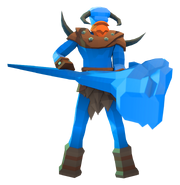 The Wild Berserkers, as followers of the ancients, are destined upon completing their guardian trial to receive the tribal mark ~ granting them inhuman abilities and the strength to wield a mighty hammer ~ true Mastery unlocks an explosive Stunning Slam, capable of slowing the movement of even the mightiest of foes.

The champion sits low in his chair, a mug of ale in his hand as he stares off into the distance, completely lost in his own thoughts, oblivious of the activity in the tavern around him. In his hand the ale swirls around and around, yet to touch his lips and growing cold. He recently lost his position in the king's court and has been through out in the streets, for better or worse. That's when a deep voice cuts across his consciousness, and he is jolted out of his daydream into the present.

It is a deep throated voice, almost like a giant's voice, deep and booming. Sweeping his eyes over the sea of people, he spots a tall man, dressed in rags that had seen better days and a gigantic axehead pokes out like a mountain top just above his head. He wears a leather helmet, two horns from a lone buffalo, stick out from it, each one sharp as an axe. He seems to be a trader of some sort, come from one of the many tribes up north in the Tundra.